Since the time I was invited to give a speech at the Eid reception, until I gave the speech, I was constantly preparing and editing (with the help of friends of course). This was multitasked with other preparations for the trip, plus training and daily life. One of the challenges of writing the speech, was that I wanted to briefly go into my story, mesh that with important related topics, and keep it concise. I have never given a formal speech before, mainly I have had experience giving presentations, and mostly on technical work.

I got to DC safely, the night before the reception. Unfortunately, the rain was pretty bad during my trip, which affected traffic and did not allow me to visit the MLK memorial 🙁 (it is my goal next time I visit DC). Because of preparations, and the weather, I could not attend the Fordson movie premier at the State department which was shown before the reception. I do hope to see it locally in Atlanta. Everyone who has seen it says it is a great movie/documentary. I did get to meet the players at the reception.  My hosts (Ayesha Khalid) kindly gave me a ride to the State Department and printed my speech.

Back to what happened – a friend had helped me to edit the speech a bit more, about an hour and a half before I got to the State department, and thus, I did not have a printout of that final copy of the speech. Thank God for smart phones, I was able to email the speech to Sarah King while sitting in the State Dept. lobby, and at the same time, read and practice the speech while looking at my phone. (she gave me printouts when we got to the meeting area) I wonder what people in the lobby thought when they saw me whispering, staring at my phone, and practicing looking around the room at my “audience” as if I were giving the speech.

The athletes attending the reception, were invited to meet with Secretary Clinton, and have a group photo. Here is a short bio list of some of the athletes:
http://www.state.gov/r/pa/prs/ps/2011/09/171777.htm

We first hung out, got to meet Representative Farah Pandith. It was really nice to meet her in person, and other fellow athletes. 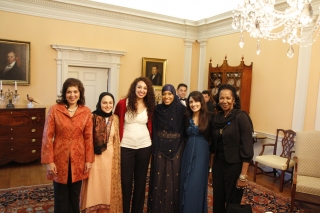 Everyone made us feel welcome. Rep. Pandith gave me some tips for the speech (such as treat it like a competition, you have experience with that, and you are about to go out and perform) and said not to be nervous. 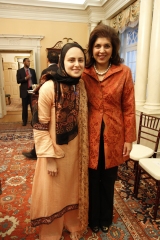 Then the message came that Secretary Clinton was headed our way. So we got seated. When I had first arrived in the room, I had noticed the chairs, and then my name, and that it was next to Secretary Clinton’s! I exclaimed this to Sarah, and of course, that was the first picture I took. I promise none of my pictures are photoshopped. 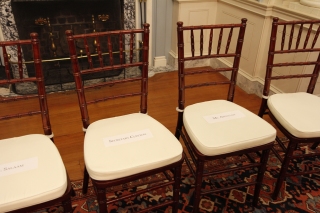 As we were seated, we would became completely silent when we were told she was coming. Rep. Pandith and the others said we do not have to be quiet. But we did it 2-3 times when we thought she was coming. Like it was a library. At one point, some of the State officials got quiet, and we said hey, why are you guys getting quiet 🙂 Everyone told us that Sec. Clinton was very nice and personable. 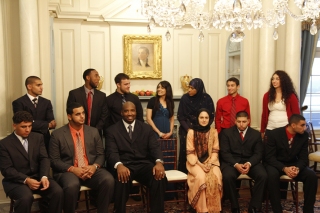 When she came, we found out she was. She shook our hands and we introduced ourselves. 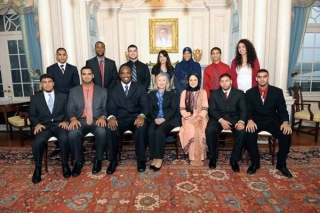 Then we had the pictures taken. After that, everyone was escorted to the reception area, except for myself and Ephraim Salaam, as we were the two guest speakers. EEKS! I got a little nervous. Ambassador Capricia Penavic Marshall  from the Office of the Chief of Protocol, told Huma Abedin (who came in after Sec. Clinton) that I was a weightlifter. Before Sec. Clinton came in the room, she had asked all of us what our sports were. When I said weightlifting, she said she did not expect that answer from me 😉

We went over what was to proceed, we walk out following each other, where we were to stand was marked on the podium floor, the order we were speaking in, etc. Here is the State Department link that includes Sec. Clinton’s speech in text as well as the entire video. My speech starts at about 15:40

US State Department Eid-ul-Fitr reception speeches- September 7, 2011 from Kulsoom A on Vimeo. 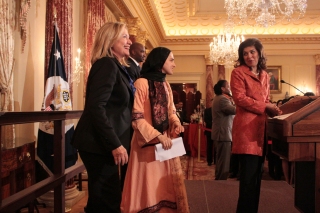 I was nervous holding the folded printout of the speech but I felt fine at the same time. As I listened to Sec Clinton’s remarks, I got myself “pumped up.” Similar to what I try to do before I attempt a lift. 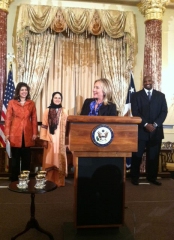 My goal for the speech was to try to have some emotion/excitement so I would not speak in my normal monotone voice. Many of the things she mentioned, I could relate to and realized my story addresses those topics. Such as the State dept sponsoring exchange programs, mentioning the other athletes, the challenges of fasting and athletics, and the freedom of religion. 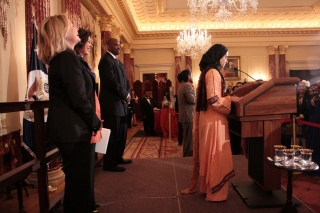 After Ephraim, I was introduced and so began my speech (which you can see for yourself rather than me describe in words). I felt that there was good energy from the guests and they were very attentive. I would have liked to have had more jokes in my speech; it was already long enough, but I did insert a little humor. 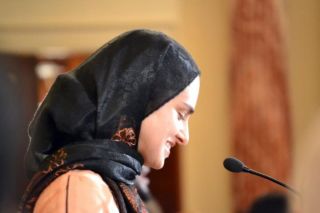 As I finished and walked to my place on the stage, Secretary Clinton gave me a hug! I was like this is for real! I had the speech in my left hand, so I gave a one armed kind hug. She was really nice, and said my speech was great, I told her thank you, I was nervous but I think it went well. Here is a screenshot of that (no photoshopping here): 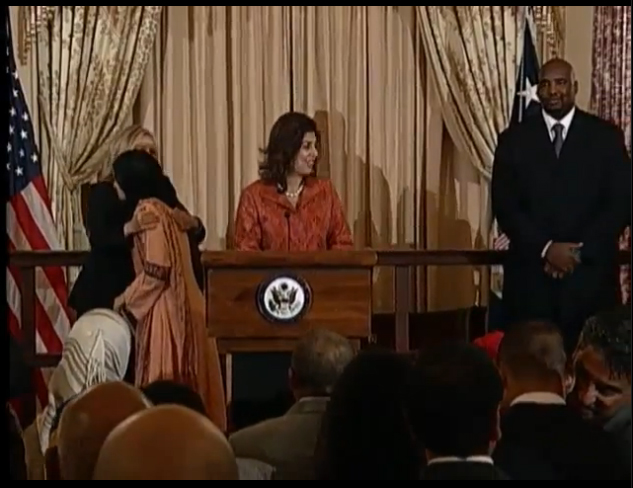 Afterward Sec. Pandith’s closing remarks, many people stopped to give me their support and appreciation for my speech. It was nice to get to meet some people, I wish I could have been able to mingle more with so many great guests there. I got my purse which had my business cards, and passed those out. I decided to go to the press area and do some of those interviews. [dunya news, State dept news video, VOA Afghanistan service (radio), ru entertainment ] By the time that was over, many guests had left (it was a weeknight after all). Still, I did get to speak to many, and had some time to hang out in the State building lobby that has all the world flags. Then dinner at Tarbouch in Arlington, VA.  The pictures I was able to get were before and after my speech, those inserted in between are from other sources. 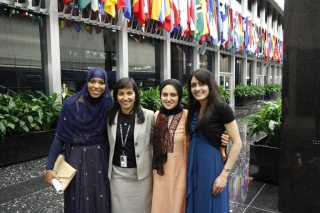 Here is a link to the album I have of my trip.

I will soon have a high resolution copy (and possibly more pictures) of the event. I will post those in a new blog post and add them to the album.

On Thursday I went to the VOA building and got a look around. I was interviewed by VOA Bangla service. Also, I went over to the Al Hurra DC bureau and had a live interview there. It is up now at:
Al-Hurra’s “Al Youm” – 9/8/11 – Hour 2, there is a few seconds preview at the start then forward to 20:50- 26:55 for my segment & Eid state reception.
http://t.co/MiLELSp 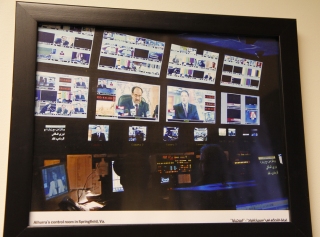 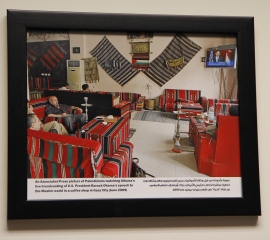 Friday: I went to the Pakistan Embassy and submitted my paperwork for a passport. I also visited the CAIR National office and got to meet everyone in person; nice to meet those who helped me. VOA Urdu service filmed more footage of my visit and there will be a longer segment of my story to be broadcast. 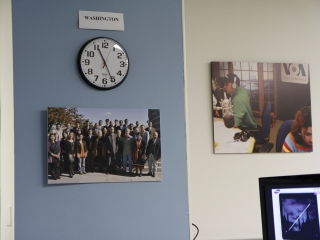 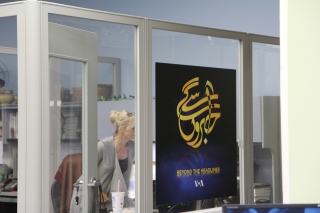 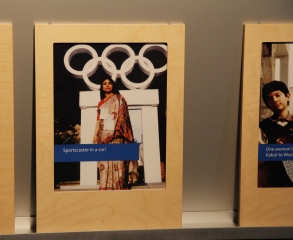 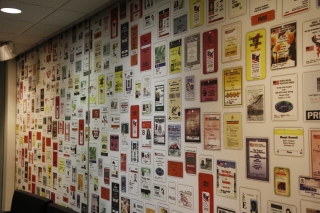 That evening, I visited a gym called Outlaw Crossfit. Rudy Neilsen is a great coach. He, his wife Laura (who is from Atlanta) and everyone at the gym were very kind. I got some good tips on getting a faster turnover and head through on the jerk. Mohamed Sadek and Amina Rubin from CAIR were with me to take photos and video for a CAIR documentary. Here are a few shots (also got some family shots with Rudy, Laura and their son Deacon). 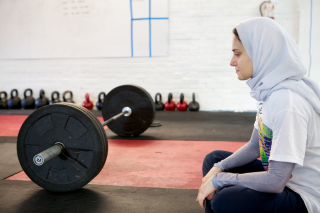 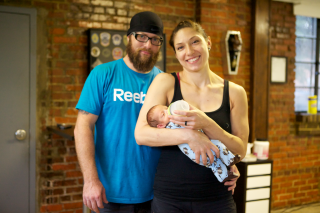 I also had a phone interview with Paul Newberry from the Associated Press. He had also written the very first AP article on my story.
http://www.masslive.com/sports/index.ssf/2011/09/sports_helps_muslim_athletes_c.html

Saturday: I got to see Salma and her husband Hasan. Salma is a childhood friend. Later on I got to see her sisters who are also in DC. We got to see some of old town Alexandria and later night downtown DC in the time we had that day.

Sunday: It was my flight out. It was also the 10th anniversary of September 11. I felt sad, remembering that day but I also felt hope for the future.

Getting back to Atlanta, I started getting caught up with things. I am visiting and training with weightlifter Robert Hall for a month.   I have known him for a little over a year. He is a good weightlifter, coach and has been encouraging and supportive during the time I have known him. I appreciate his and everyone else’s support for my upcoming participate at the World Weightlifting Championships in Paris, which I will represent Pakistan. Like I mentioned in my speech, its not about being on the winner’s podium or getting a medal, but just being able to participate is the biggest accomplishment. I hope that it will help open doors and encourage more participation of women in sports. Though I know I do not have a chance of winning, I am still continuing to train as hard as I can, and want to do my best.

Here is a link to a website started by Travis Cooper (my coach who is currently training for a month in California):
http://kingofweightlifting.com/

Last but not least, I got my Eleiko women’s training bar. 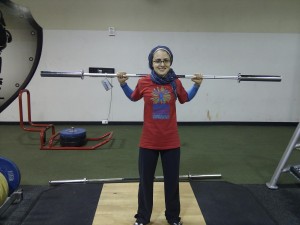