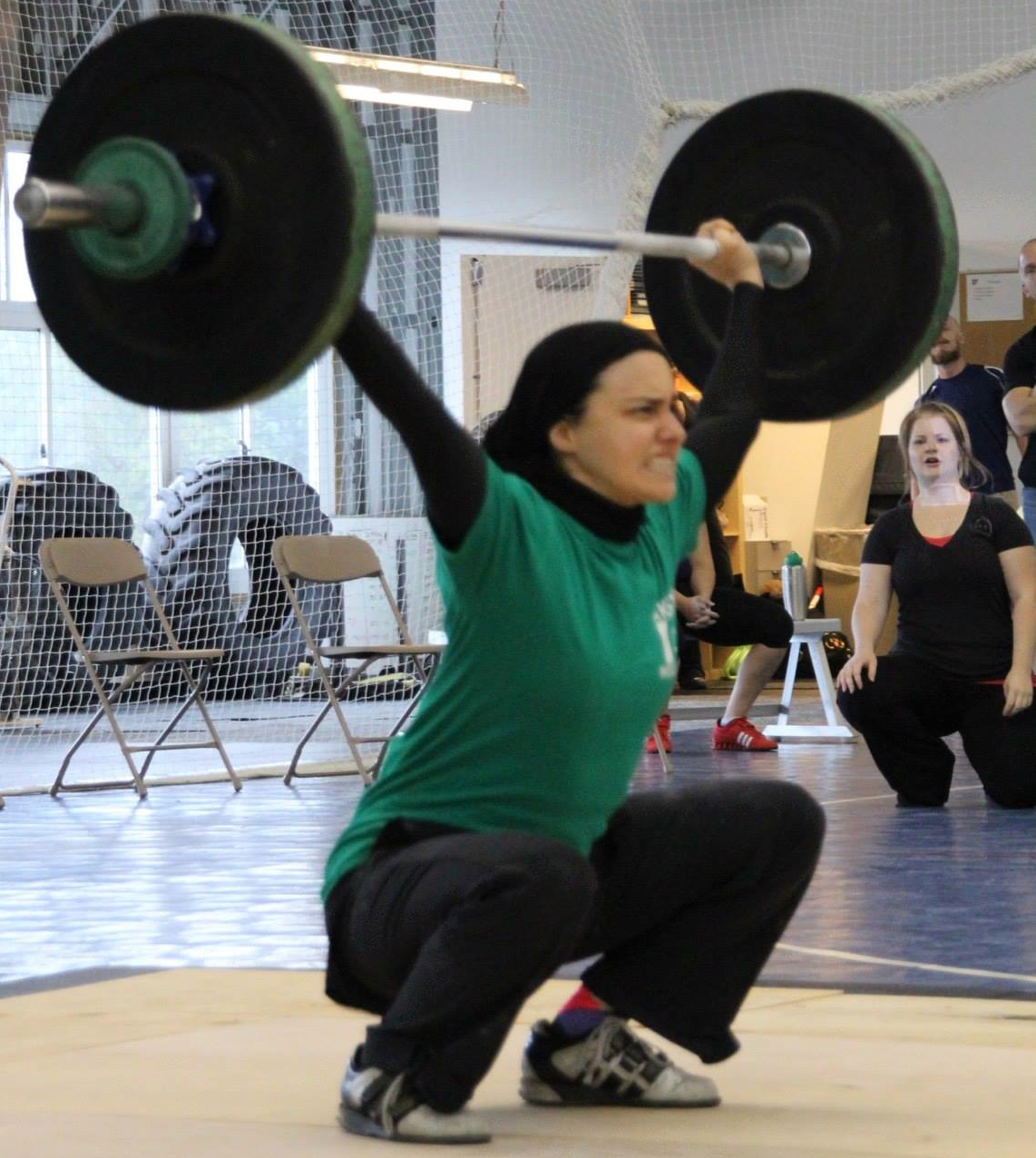 It has been a while since I competed, and I bombed out at the last two, so this past competition at Emory was more for me to get my confidence back, and help me mentally and emotionally. Shelly Truesdell has been coaching me for a few weeks (she’s been a big help, it makes a difference to have coaching and moral support in person), whenever we both can, and continuing training programming template by Travis Cooper.

We decided on taking conservative attempts, especially for the 1st attempts. This was the first time I had some family and friends (outside of weightlifting) spectating. As usual, there was some drama, such as, an unexpected road block on Emory campus, due to a race. I was going in circles finding the right parking lot near the athletic center where the competition was held. I ended up parking at the visitors parking lot that was the farthest away. A kind stranger also parked in the lot, helped us out by personally driving us to the entrance to the athletic center. With his help, I was able to make it just in time to register and compete. I actually walked very swiftly, but the inner adrenaline helped, in spite of my shaky hands, and I was able to hit 5/6 lifts.

Here is the video compilation of my lifts (embedded Youtube link)

Thanks for the support to those around me and out there. I am looking forward to getting back to where I was, and hopefully setting some PRs (personal records) in my lifts. It has been a long road and I am trying to maintain patience and consistency.

Here is a book Travis recommend I read (or hear). You Already Know How to Be Great: A Simple Way to Remove Interference and Unlock Your Greatest Potential by Alan Fine

From Mistress Krista – “The Inner Game series is excellent. And it doesn’t matter if the sport doesn’t directly correspond. I learned tons from The Inner Game of Tennis even though the last time I played I was about the same size as the racket. The part I actually loved about the tennis book was a discussion of how to approach the ball as a playful toy, and listen to the music it makes. Something similar happens in most sports — you can treat the objects as toys and the movements as joyful play; and there is often a “music” to it. I know there is a little kettlebell song that happens when I am timing things just right. Same in WL — there is a sound sequence that occurs if you are very attentive; you can tell whether the bar is going to fall properly in advance by the music of the bar. By attending to the non-linguistic-thought elements of the game, you engage the “best self”.”

I recollect a coaching cue I have received for the issue of fully bringing in the bar (more so the snatch vs the clean, but a little bit for the oscillation for the jerk), that there will be a sound, or rattle of the bar and the weights, that this sound can be a cue you got the bar in, to the power position. I like the idea of timing, rhythm and music.. and help to make it more fun, less thinking (which I tend to do a lot, over think, where when going for it, you have to just do it, especially max efforts). I need to check this book out!

A few others suggested by Stumptuous readers:

The Mental Edge by Kenneth Baum
Mind Gym: An Athlete’s Guide to Inner Excellence by Gary Mack and David Casstevens
The Art of Learning: An Inner Journey to Optimal Performance by Josh Waitzkin
Body, Mind, and Sport by John Douillard
Anything by Terry Orlick

P.S. Here are some photos from the competition.