PBS Newshour Extra – Many Firsts for Women At 2012 Olympics

I was interviewed and mentioned in this article below, original article is located here at pbs.org.  Below is a copy.

Many Firsts for Women At 2012 Olympics

Posted: 08.01.12   Allison McCartney – The 2012 London Olympics mark the first time that every competing country will have at least one woman on their team. This comes after years of encouraging female athletes and altering rules that kept out women in religions and cultures with modest dress codes. 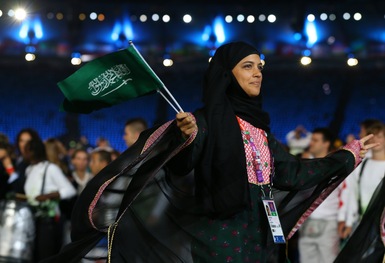 (Photo Caption: Sarah Attar of Saudi Arabia enters the stadium during the Opening Ceremony of the London 2012 Olympic Games. Attar is one of the first female athletes to compete for Saudi Arabia at the Olympics.)

Although it now seems difficult to imagine the Olympics without athletes like swimmer Missy Franklin and gymnast Gabby Douglas, women were not allowed to compete in the first modern Olympic Games in Athens in 1896, and their inclusion was controversial long afterwards.

With the introduction of women’s boxing in 2012, London marks the first time in Olympic history that women can now medal in all the same events as men. These great strides for women’s athletics give girls around the world more incentive to take up sports.  In fact, this year there will be eight more women than men on Team USA.   Olympic organizers have also been diligent about putting pressure on countries and athletic programs that do not provide women these opportunities.

More women are competing in the Olympics in part because of new regulations on clothing. It is considered inappropriate in some cultures for women to wear the revealing outfits required for sports like beach volleyball and swimming. The Olympic organizers have been very strict in the past on not allowing participants to deviate from the official uniform attire, and therefore effectively banned women who could not wear the designated outfits for cultural or religious reasons.

US female weightlifter Kulsoom Abdullah made headlines in 2011 when International Weightlifting Federation (IWF) rules prevented her from competing at the national level because they said the long sleeves and pants she wore for religious purposes prevented judges from seeing if her elbows and knees were properly locked during lifts. “When I could not go to my first qualifying US national competition, I was going to give up,” she said.

“After talking to many people, I was pushed to try to advocate for change.”

Her efforts were rewarded when the weightlifting committee allowed her to wear a full-body suit underneath her uniform that would be tight enough for the judges to accurately assess her performance.

Dress regulations have changed other sports as well. This will be the first year that female beach volleyball participants will be able to compete in clothing other than bikinis. Because the International Volleyball Federation (FIVB) is trying to expand the sport into developing nations, spokesman Richard Baker said, “many of these countries have religious and cultural requirements so the uniform needed to be more flexible”.

Change is not fast enough for Iranian Women’s Soccer Team

In the run-up to the 2012 Olympics the Islamic headscarf, known as the hijab, that women in Iran are required to wear, was banned in international soccer competitions.  FIFA, the world governing body for soccer, repealed the ban in early July 2012, but it was too late for Iran to qualify for London competition.

One of the first two Saudi women to ever compete in the Olympics was nearly excluded from the 2012 Judo competition because officials banned her hijab over safety concerns. However, her Olympic hopes were saved when officials reached a last-minute compromise that said she could wear a modified “sport” design.

The fact that these uniform changes had to be requested on an individual basis concerns Abdullah.  “If sporting governing bodies took the initiative to reconsider clothing accommodations, without someone having to request it or advocate for change, it would encourage more women to participate, being more inclusive,” she said.

The alternative, she warns, is that, “if a country would not allow women to compete, such as with Saudi Arabia, then those women would unfortunately not be able to participate in those sports.”