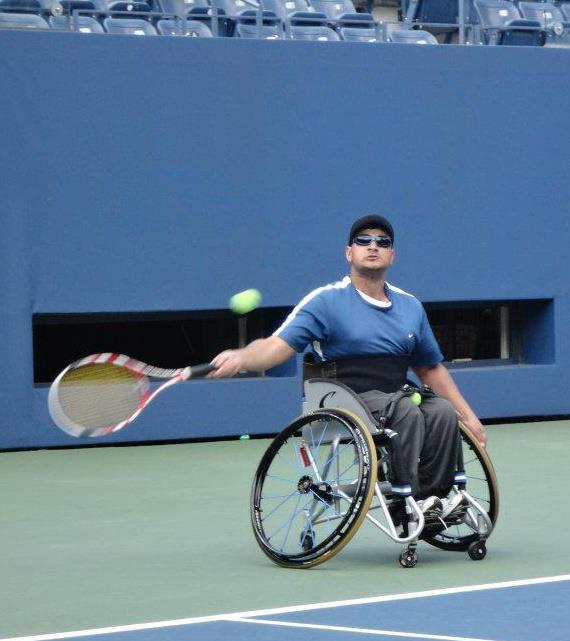 Those in Atlanta, GA, USA, this weekend, Atif Moon (Pakistani-American living in California, also the co-founder of Center for Global Understanding) will be competing in the Atlanta Open Tennis Championships a NEC Wheelchair Tennis Tournament. Come out and cheer him on! He will start competing this Friday May 3, 2013 & will be here through Sunday.

His first match is Friday 9:30am, then another match at 2pm if he wins the first match (inshALLAH!). Semi-finals will be Saturday, and finals Sunday. Weather forecast for this weekend is high chance of rain, weekend schedule is subject to change. Please check this website for tournament schedule and results. Go to “Draws” and then “Men’s Wheelchair A Singles”, which is the division Atif is in. There will also be a doubles one he plays in when they post the draw.

Article in Aquila Style by Fatima Fakier of Friniggi Sportswear for Muslim Women about the challenges Muslim women face within thier own religious & cultural communities in regards to sports participation. Myself & other active Muslim women from different countries were interviewed. It covers important topics that we should discuss, so please share this.

Fatima Fakier is the founder of friniggi Sportswear, a company specialising in performance sportswear for Muslim women. For more information, visit their website or Facebook page

This was my worst competition ever! I did not make any of the 3 Snatch attempts, which means I had no score/total. In spite of this, I went ahead and attempted 3 Clean and Jerks. I went to the ladies room at the wrong time, so in my warm up I got to 35kg then had to run out to the platform and do 53kg. It was just not my day! I learned from this experience. I hope next time is better and I get to PR one day.

Here is the picture album (or join the fun on my Facebook page which just reached 800 likes!):