Considering the date, we can all conclude that I am definitely not going to the Olympics, representing Pakistan in weightlifting.

I had been training full time and waiting on the International Weightlifting Federation (IWF) wildcard slot decisions.  According to the documentation posted on the IWF website, there are a total of 4 female wildcard/invitational slots.

July 12th email I sent to the International Olympic Committee (IOC), Pakistan Olympic Committee (POC), and the IWF appealing for a wildcard to represent Pakistan, a very underrepresented country in the Olympics, as a female weightlifter.

The following are exercpts from the letter I sent:

“I am very inspired and excited to hear that female Saudi athletes are able to compete this year and humbly request the same opportunity to compete in weightlifting for Pakistan.”

“I led the effort in modifying dress code restrictions in weightlifting to be able to proudly compete representing Pakistan as the first female ever at two international weightlifting competitions.  The first competition was the World Weightlifting Championships November 2011 in France.  The second and most recent competition was the Asian Weightlifting Championships this past April in Korea.  I feel by representing Pakistan at the Olympics, this would increase female participation in underrepresented countries and in other sports. “

“There are many that want me to go to the London Olympics. I have gotten emails and messages of support for this, because of various issues, such as being female, representing Pakistan, and leading the effort in having the International Weightlifting Federation re-consider the clothing requirements to allow a head scarf, and covering of the arms and legs.  To give some examples: All of the reporters and news media who have spoken or covered my story and experience from various countries; coaches and athletes from different countries who I have met at competitions were encouraged and supportive of my presence and participation and happy that Pakistan was represented. I have received many emails and well wishers say they are cheering for me. I described the tremendous support I have recieved for my achievements, competition efforts and hopes for Olympic participation. How I have been and continue to share my story, and universally, it is something people can relate to and be happy about, inline with the spirit of sports.”

“Being invited to deliver remarks following Secretary of State Hillary Clinton at the U.S. State Department reaffirmed my determination and belief that my story and experience has universal impact: Pakistani, non-Pakistani, female, male, Muslim, non-Muslim, children and adults have all been happy for me.  This makes me happy about the spirit of sports, bringing people together and being inclusive.”

I received two replies, first Veena Masud Secretary General of the Pakistan Olympic Committee: “Many congratulations on your remarkable achievements. Pakistan is proud of you.  You have our support and hopes that you may be given this chance to compete in the London Olympic Games.”

The second from the President of the POC with an attached response from the Pakistan Weightlifting Federation (PWF).  In summary it stated that the POC president asked the PWF to find out anyway for me to get a wild card invitation.  They stated they did what they could do and that June 26th a list of weightlifters for the London games was finalized by the IWF and 2 wildcard female slots were awarded.  This list is final, and that the IWF can not add anymore weightlifters.

To date, I do not know the reason why only two out of four female wildcard slots were given, and if two were available, why Pakistan was not eligible to receive one?

Thanks to all who have supported me, financially and logistically for my competitions, moral support and helping to share my story and experiences.  I was able to accomplish more than I could have fathomed, in a year that went by very quickly, as just one female who wanted to lift in religious attire.  All the best to those who are competing in London!

Ramadan will be starting this year July 20th Friday OR July 21st, Saturday, 2012, pending when the new moon for the lunar calendar is sighted.  This will be finalized Thursday, July 19th after Maghrib (evening) prayer.

Ramadan coming at a time I am going to need reflection again. This year was full of unexpected events, surprising, exciting, inspirational, challenging, happy, and sad with no chance to breathe or rest. I have no complaints about this as for someone to have their voice heard, and have these opportunities are rare. I am blessed for being able to experience them all — I have learned a lot.

Now I need to move forward. I will not stop weightlifting or sharing my story, no matter what anyone says or does! But I have reached a point where I will reevaluate now what I do going forward for various reasons, not just because I am not going to the Olympics. I will still continue to post my experiences and journeys with this website.

**Update July 20, 2012** This is a post I wrote last year about Ramadan, fasting, exercise & diet:
http://www.liftingcovered.com/ramadan-fasting-weightlifting-20111432ah/
I am working on a new post for this year, and hope to have it posted up in a day or so. If you have any questions or want more information that is not in last year’s post, please contact me and I will try to answer and incorporate that into the new one.

I was interviewed by CNN July 5, 2012. Michelle Cohan, Chris Hrubesh & Max (sorry I forgot your last name!), came to my gym to record me in training and also conducted a sit down interview. I have to give them kudos, there is no A/C and we had to have the fans off due to noise. I had to wipe sweat off my face after each question! It aired today, and should be airing a few times tomorrow, July 17th. It was for a video package on Olympic athletic attire, how it has changed and how this year at the Olympics, it will be more inclusive. When the video is put online, I will update this post with the video and link.

Here is the full picture album:

One behind the scenes video clip:

I hit a new record Split Jerk (from the blocks, where the move is isolated from having to do the Clean first) at 65kg or 143lbs, which was 5kg more than I have done before. It has required a lot of patience in my training, including sweat, blood (like when I slammed my jaw and cut my tongue on both sides) and tears. I am hoping for more improvement. With the recent numbers I have been putting up in training in all of the lifts, I see more PRs coming.

She is still continuing to kick a$$, taking names on the way. She is featured in an article on her journey from depression, to speaking at Tedx to competing at the The CrossFit Games Asia regionals.

And a great video interview with Think Up
http://thinkup.ae/think_skills/interview-amna-al-haddad/

I have the video embedded here:

More information, trailer and locations/dates here: http://www.tugg.com/titles/strong?region=global&state=upcoming
Atlanta, GA – Saturday, July 21st, 5:00 pm at Plaza Theater on Ponce. Followed by a Q&A with U.S. Olympian Cheryl Haworth & filmmaker Julie Wyman. “Cheryl Haworth is a young woman with a big dream: to be the strongest woman in the world. As the 300-pound U.S. Olympic weightlifter prepares for Beijing 2008, she struggles with injury, confidence, and her place in a world where larger women are not readily accepted.” $12 per ticket.

To add on to the flattery, my cousin’s daughter, Maira Shah, also (as my friend Nazerah’s daughter, Salmah did) colored her depiction of me in her coloring book: 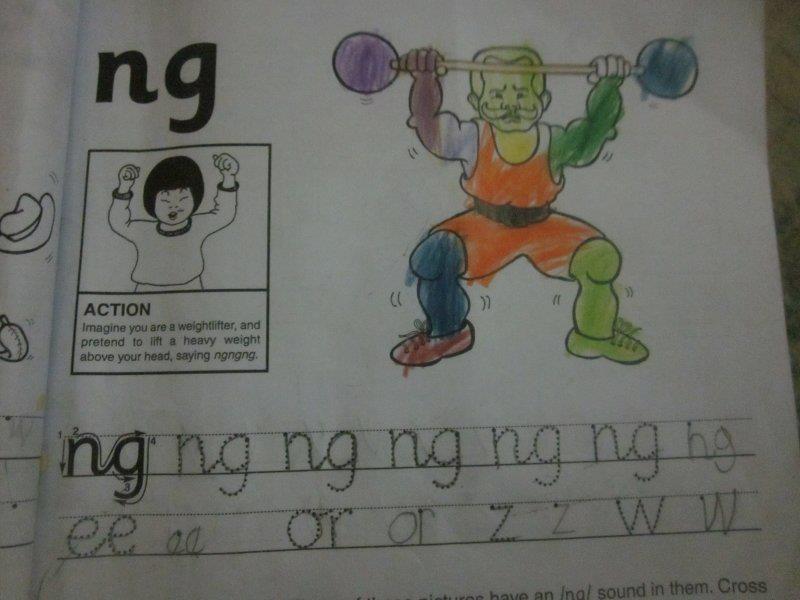 The resemblance to me is uncanny.

Thank you for reading.  Till next time…